What is in a name? And how does a name influence how we think about the thing that has been named? What conclusions do we draw from a name?

There is a period of time in the history of Europe which is known at the Dark Ages, although these days it is better known as the Middle Ages or, even better, the Medieval period.

A particular picture has been doing the rounds on the Internet which makes the following claim about the Medieval period:

You know, there was another time when science wasn't taken seriously and religion ruled the world. We called it the Dark Ages.

Atheistic Facebook pages and the like are fond of sharing images such as this. But does it hold any truth? 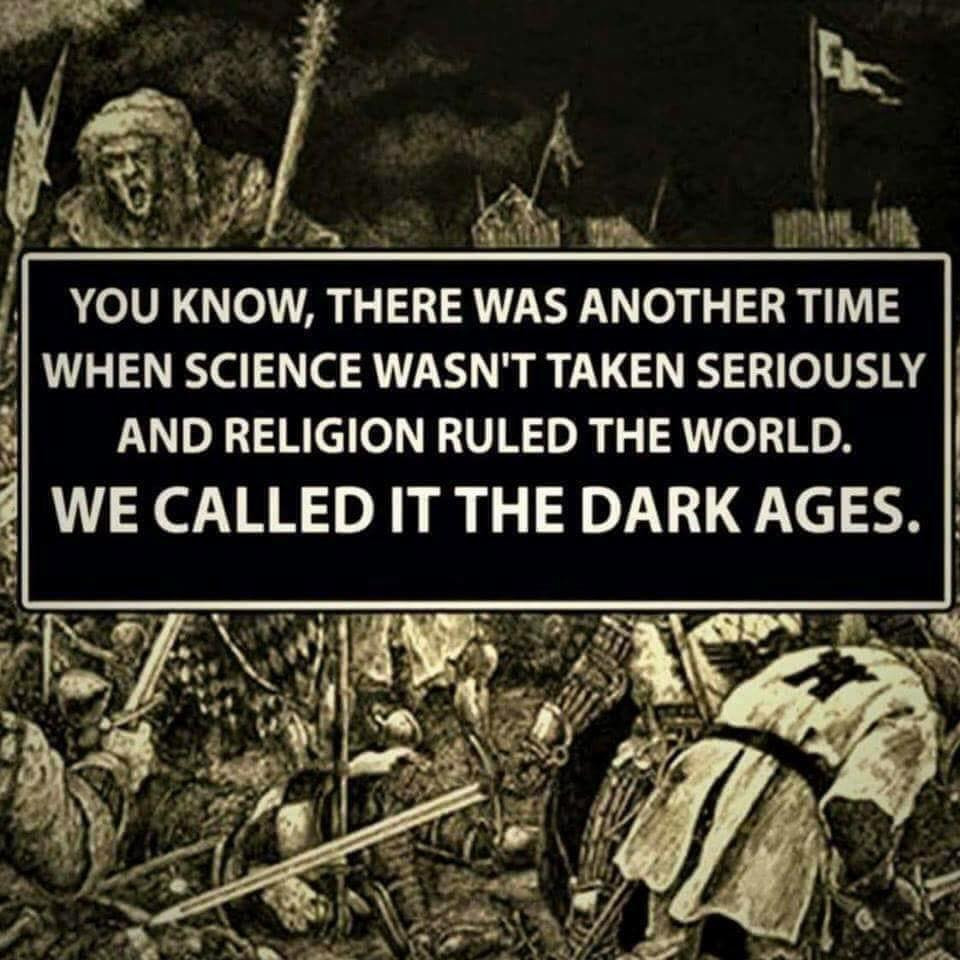 Firstly, we need to look at what the image is claiming.

Let us consider what is implied by the various phrases of the text.

"There was another time", implying we are going through a similar period. Science requires unquestionable adherence, otherwise society will collapse and human advancement will be impeded for a thousand years.

Yikes, that sounds scary! Melodramatic, even.

"Religion ruled the world". This statement does not apply to the Dark Ages only, but pretty much all of pre-modernism. The ancient Greeks and Romans, who gave us philosophy, art, and many technological and scientific advancements, were very much religious.

"Science was not taken seriously". This is the smoking gun phrase, which gives away the true intent of the picture. During the dark ages in Europe, the Islamic world experienced a golden age of scientific, technological and philosophical advancement. This is a common theme one comes across when studying history: when one culture declines in some fortune, often another one takes its place. However, religion was at the centre of the Islamic world! Therefore, this image is not an indictment against religion per se, but Christianity.

"We called it the Dark Ages". Various periods in history are known as dark ages. For example, after the Bronze Age Collapse, there was a dark age lasting hundreds of years in Europe, Asia Minor and the Near East.

It is true that during this time period in Europe, there was a fervent adherence to the teaching of the church in Rome. However, people being people, this was not universal, and there were also many people who were not religious or devout in any way.

What about the other claims?

What is a Dark Age?

A dark age is actually a broad term and does not necessarily refer to a single period of history. It typically is a period in history for which we have relatively little evidence of what happened during that time, particularly written records which can give a first hand account. (Archeological discoveries are always subject to interpretation and in a sense suspect. They are best interpreted in the light of writing from the perspective of several different authors, but having this is a historiographic luxury.) Alternatively, it is a time when little or no progress was made culturally or technologically. It is even possible that a cultural and technological regress happened. There have been several dark ages. "The Dark Ages" (capitalised) generally refers to the period of time between late antiquity and the beginning of the Renaissance. It is more commonly known as the Middle Ages; some historians feel that the stigma of calling it "the Dark Age" is uncharitable for various reasons.

Was It a Dark Age?

In a sense, yes. During this period of time (which, like any historic time period, defies precise definition, but can be thought of as being between the fall of the Western Roman empire and the beginning of the Renaissance), there was a relative reduction in the production of new thought and ideas. Scholarly work continued, but in a reduced capacity.

Why Was It a Dark Age?

The question is: did this time of reduced written output come about because of systematic religious oppression? For the reasons listed below, I say no.

Socioeconomic-political Reasons for the Dark Ages

As mentioned, the "Dark Ages" is termed as a period of history in Europe which roughly followed the fall of the Western Roman Empire. This is the historiographic tradition, rather than claiming that the rise of Christianity (the two of course not being mutually exclusive) caused it. With the fall of the Empire,

At this time we see the move away from one monolithic "Rome" to a rise of Franks, Goths, Vandals, Huns, etc. settling in previously Roman territory. After a long and turbulent period, these settled into regional powers with their own distinct cultures. It is in this time that we see the first appearances of the languages which we know today: English, French, Spanish, German, etc. Eventually the concept of nationalism would develop. Where before everyone was "Roman", now we had regional powers forging their own identities. Rome was for a large part inclusivist, and allowed people to continue speaking their native languages (although Latin was the official state language) and practise their local religions. This could, to some extent, have been a barrier to trade, commerce, and the exchange of ideas (especially if there was a lack of a lingua franca, which Latin had previously been).

These new states also wanted to be the spiritual successor of Rome. Therefore whatever was "good" about Rome was adopted; most notable its system of laws. With this came the retention of Latin in official capacities, even as cultures drifted to adopting more regional languages as the vernacular. This created a division between the learned elite and the commoner, furthering impeding education (and the benefits which come with it).

De-urbanisation also had a large impact. Cities became the targets for marauders, so many felt it would be saver to be in smaller, less wealthy communities. So less people lived in (historic) centres of learning, and more people simply trying to survive on farms and small holdings.

What we actually see in this period of time is that monasteries became centres of learning. It was one of the few places where people in Europe could go to get an education, and where the ancient wisdom was preserved in terms of copying and translation. More than the Bible, in monasteries the works of the ancient philosophers and "scientists" were studied, copied and preserved. This paralleled what was happening in the Islamic world. Relatively speaking, not so much was added to the ancient thought and traditions, but the candle was kept burning in Europe, at least, despite the difficulties of this time.

The Church and Science

At this point, it is necessary to remember that, before the Enlightenment, the word "science" (Latin "scientia") simply meant "knowledge". With the advent of the Enlightenment it came to narrowly refer to "natural science"; that is, knowledge of the natural (physical) world. In Western Germanic languages such as Afrikaans, Dutch and German, the word "natuurwetenskap"/"natuurwetenschap"/"Naturwissenschaft" is still used, which literally means "knowledge of what is natural". Before the Enlightenment, even theology was known as a science (that is, "a discipline of knowledge"). Indeed, theology was known as the "queen of the sciences". The place of prominence did not mean that it was taught first, but last. One first had to learn the natural sciences, philosophy, grammar and poetry, before one could "graduate" to learning about theology.

I hope that the reader will agree that this does not sound like intellectual oppression.

What About the Renaissance?

The Renaissance was a revival. A revival of what? A time when humanity was unencumbered by religion? No, but a revival of ancient ideas (philosophy, mythology, etc.); the very same things which were "kept alive" in the monasteries. That is why in the art of this time we see an explosion in the themes of Greek and Roman mythology. This is because the ancient knowledge leapt out from the monasteries back into secular society. This did not happen, because the monasteries deprived society of this knowledge, but because of changing times and fortunes. This revival of ancient ideas led to new and novel ideas in the Renaissance, and the furthering of the arts and natural sciences. Notice, however, that biblical themes in this time (the Renaissance preceded the Enlightenment) were also not neglected: Christian sentiments remained strong. Therefore the Enlightenment was not a revolt against oppressive religion.

Why did the Renaissance happen? Generally it is due to increased wealth (due to trade) and political stability; at least to levels which had not been known since the fall of the Roman Empire. It did not happen because of waning religious allegiances. If anything, the Reformation (which was taking place at the same time) and counter-Reformation showed that there was very much a strong a fervent religious sentimentality in Europe at the time of the Renaissance.

There are certain fake stories on the Internet which I'll never understand why people conceived them and wanted to spread them. As I have already alluded, in this instance I believe there is a reasonably knowable reason, and that is because it is pushing an anti-Christian agenda specifically. It does this by deliberately spreading misinformation. Not everyone is as well acquainted with history to know it to be a lie, but I suspect many who share this kind of thing do. They are willing to make an intellectual compromise to damage the perception of Christianity (and other religions, to be sure) in the public eye.

Yet, if we return to the example of the Bronze Age Collapse, this claim is completely nonsensical. There is broad agreement that the Bronze Age collapse was due to a complex system collapse, and not due to and single reason. Advanced civilizations fell, and it took hundreds of years for humanity to recover from that. Yet, I have never heard that religion was blamed for the Bronze Age collapse1. At this point in history Christianity as it is known did not exist. So it cannot be reasonably blamed. Rather, it is acknowledged that there were complex causes for the Bronze Age Collapse, such as climate change, political instability, agricultural crises, trade disruption, etc. Yet these same considerations are not applied to the Dark Age mentioned above (by Internet atheists, but not scholars).

The claim that Christianity caused the Dark Age in Europe is unfounded. True scholars of history are far more nuanced and objective. Indeed, one can argue that Christianity did its fair share to preserve and promote culture and the wisdom of the ancients. Rather, this kind of claim is wilfully and maliciously shared to further an unscrupulous agenda against religion, and in this case, Christianity in particular.